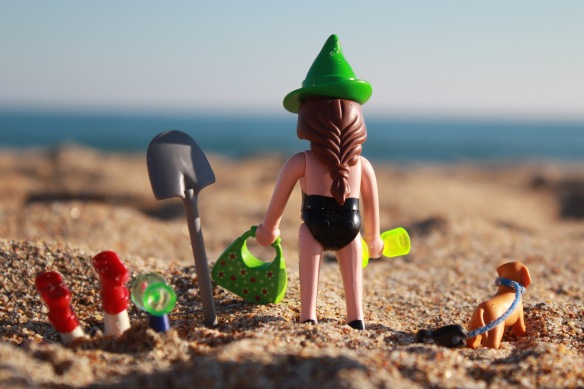 Mrs Playmo wisely decided that the only way to enjoy an uncrowded beach was to visit by night with a good book, a torch and a crate of rosé. It was a pity that Prince Charming had turned up before she had finished her chapter.

The school holidays have arrived and the temperatures have soared outside. A blanket of heat has descended on MM’s Languedoc home. Like every year, I have evaluated the insufficient available space for my angular frame between the frozen peas and the ice cubes, then resigned myself to a period of the year I associate with bored children, het-up neighbours, stifling heat, and water restrictions as the village spring dries up. The insistent scratching of the squads of cicadas camouflaged in the cedar and pine trees around the house does nothing to reduce the feeling of oppression affecting all bar the cat, who melts into a contented black puddle in the shade of the hedge, surveying his world in a lazy trance of warmth.

Behind closed shutters, the locals have gone to ground for the sacrosanct siesta whilst the sun beats down on the façades of their homes, and the streets of the village remain deserted until the temperatures reluctantly go down in the evening.

But not for long. The only nutters prepared to brave the heat have appeared on the horizon, bang on time to break the silence – a long line of metallic turtles shimmering in the heat that rises off the melting tarmac. In MM jargon, the word ‘Turtle’ designates family cars bedecked with roof boxes and bicycles, and crammed with suitcases, parasols and the infamous inflatable crocodile. Inside the air-conditioned beast, mum is sucking lemons for Britain. She glares at her husband. She had told him that there would be a traffic jam on the last leg of the journey, and once again he had preferred to follow the advice of that self-satisfied cow on the GPS. Her husband grimly grips the steering wheel with white-knuckled hands as the youngest child bawls and his sibling sings her favourite track for the 50th time since they woke up on the motorway uttering those words every parent dreads: “Muuummmy, are we there yet?” They are all desperate to arrive on the French coast, yet appear blissfully ignorant that they are en route for a tourist trap. The inflatable crocodile of the tourist season is poised, its jaws open and ready to swallow them and their holiday budget, before spitting them unceremoniously back into the motorway traffic jams.

When people plan a summer holiday in the South of France, the same old clichés pop up behind the rose-tinted spectacles. I’d like to get two of them sorted once and for all. I’m sorry to pop your bubble, but it’s better that you know.

Mr and Mrs Playmo take nothing but their love to the beach here.

The reality: First, plan ample time and patience to find a parking spot, and enough cash to pay extortionate fees for the privilege (this does not mean that your car window will not be smashed by thieves: a little like God, the French police can’t be everywhere at the same time). Next, find a space on the beach. This is more difficult than you think if, like me, you do not like your nostrils being assailed by the smell of cigarette smoke, sweaty armpits or sun screen, or are allergic to the proximity of inflatable crocodiles, over-enthusiastic teenagers wielding rackets and balls, or women who yank their bikini bottoms up their bums and sunbathe with their legs wide open (presumably incase an old lady’s Yorkshire catches sight of their untanned crotch on the number seven bus).

If you wish to be the ultimate bad mum, when the children are bored with playing in the urine-saturated surf, help them to collect cigarette butts to use as makeshift cannons in their sandcastle, and beer tops to decorate the walls – both are as numerous as the sea shells, if not more so. Or bag ’em up and bin them (the cigarette ends and the beer tops, not the kids), and do something for the planet. Then make your offspring’s day by buying them one of the overpriced doughnuts or ice creams sold by the leather-skinned beach vendors sporting little more than tight-fitting cozzies and Colgate smiles. These sun-warmed, edible nurseries for salmonella and sundry other bacterial bad-boys may not only wreck the rest of your holiday, but will give you a chance to sing the praises of the French medical system on Facebook.

MM’s Tips: Spread out your stuff! Bring sufficient beach towels to stake out your own territory. It doesn’t matter if you don’t use it all, but this simple step ensures that you don’t end up with a complete stranger sitting in your lap reading a gossip mag.

If you enjoy people spotting, this is the place for you. Bring a notebook and jot them down. My favorites are those strolling along the water’s edge – the posers that strut through the surf and oggle at bare breasts, the topless wonders glowering at the posers, and the older generation tutting at the bucket and spade mafia who get under their feet (I secretly pray that they will inadvertently tumble into the appropriately grave-sized hole my children have conveniently dug across their path). Oh, and one last (serious) piece of advice: don’t take anything to the beach that you wouldn’t willingly donate to a complete stranger, and keep a close eye on your stuff. Otherwise, you may end up chasing the self-elected new owner of your beach bag down the main road like a screaming banshee, wearing no more than a red face and the bottom half of your bikini (been there, seen that, and got left without the T-shirt -read my topless tale here). For the same reason, don’t leave your car keys in your bag. I put them in Tournesol’s shoe – nobody in their right mind would steal those because even if they managed not to keel over, I’d sniff them out immediately.

Myth N°2. A wonderful three-course meal washed down with a bottle of wine on a restaurant terrace, all at a snip of the price you would have paid at home.

If you don’t believe me about the translating skills of local restaurants, have a look at this menu outside a restaurant in Agde. The next page suggests a plateful of “seawolf” – a translation that could be qualified as a real howler.

TIP: The only way you will achieve this is either by asking the locals, or getting off the beaten track. Wherever you are in France during the holiday season, you can bet your bottom dollar that there are unscrupulous restaurants ready to relieve you of a maximum amount of cash for a minimum amount of effort, and these establishments are most often concentrated in the touristic areas. If they are out on the pavement touting for clients, they aren’t worth their salt. They are closed over the rest of the year, are generally snubbed by locals and only open to make a fast buck in the summer – so do yourself and real local businesses a favour, and either get off the beaten track and ask a local, or buy yourselves a picnic from the local market.

Reality: If you do insist on eating in one of these outfits, then at least you get the fun of reading the menu translation. In our region, very few restaurants are prepared to pay for a good translation of their menu, or (heaven forbid) train their employees to speak foreign languages well enough to explain what the guests can eat. Although my arch enemies, aka Google Translate and Bing, have added a grotesque twist to menus, I freely admit that if I need to cheer myself up I just need to read a few menu boards and I’m chortling again. It’s a laugh a minute. Many restaurants are totally immune to the idea that clients won’t (or rather shouldn’t) buy a meal if they have no idea what they are eating. Worse, they really don’t seem to care as long as their patrons cough up the money and leave.

Don’t forget that if it looks too good to be true, it probably is – many restaurants get their supplies from a huge supplier called “Metro”, where they buy entire pallets of insipid guck that they will then tout as ‘home-made’ on their astoundingly cheap menu board. The chocolate mousse may have been hastily assembled in their kitchen, but it’s about as home-made as MM is organised. If you are lucky, the jug of wine costing you 7 euros actually cost the restaurant owner 2 euros the litre at the local cave coopérative; if you’re unlucky it’s from a plastic bottle of beverage that the average Frenchman would only consider fit to descale the toilet.

Forewarned is forearmed, as they say. So now off you go. Happy holidays. And don’t forget a pin to deflate that damned crocodile.

Mrs Playmo illustrating how to deal with the inflatable crocodile.

Post Scriptum. This should have been an apology post. I have been a very bad blogger recently (MM strikes Beyoncé/Lady Gaga pose) and I have missed you all. I am very, very sorry and feel guilty about dumping everyone with no explanation. This is due to varied factors leading to lack of “me” time, leading to lack of reading and writing time, leading to a severe case of writer’s block. But rest assured that MM is fit, well and a little leaner than before. Mrs Playmo didn’t give me any support whatsoever. (She was too busy having baked bean jacuzzis with Mr Playmo. But that’s another story.) Those who excuse me for my absence will have more information about what I’ve been up to in upcoming posts. Love from MM. Mrs Playmo says hello too, from behind her bucket of rosé.