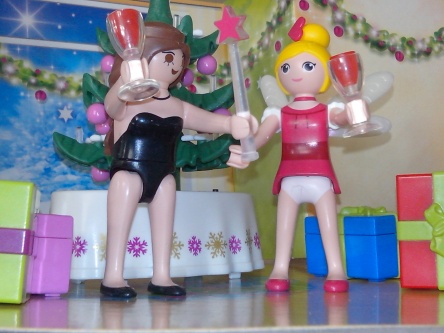 Mrs Playmo sporting her Big Girl Bustier with her pal BF, aka Badass Fairy, who flies in her Big Girl Knickers (because flying ain’t for sissies and skirts get wrapped round your ankles).

I haven’t been to sit on your knee yet this year. I hope that you have been weight training regularly, because even if I’m a mere slip of a girl at my corrected aged of 12 (4+7), I’m still a tad heavier than all the other little girls who sit on your knee in your wooden chalet.

When I saw my eight-year-old student last week, I informed her that I knew where you lived, and that I was going to sit on your lap again before Christmas and tell you what I would like to find under the Christmas tree. Her eyebrows plummeted downwards, and she looked at me with an embarrassed smile. “Uh… but you know, Father Christmas doesn’t exist. It’s the mummies and daddies who give the presents, you know,” she said, stroking my arm to soften the inevitable blow of disappointment.

Of course, I stuck up for you. If J.M. Barry’s theory for fairies had held true for Santa, you would have been a goner a long time ago, despite MM’s desperate clapping. I heard on the radio this week that children now stop believing in you earlier and earlier, and that the average seven-year-old has already acquired a soberingly grown-up attitude towards Christmas. The irony of this is that it’s all your own fault – by coughing up the goods requested on the letters you’ve been sent, you’ve signed your own death warrant. It’s cruel to say, but it’s the mean team in the fruit bowl – Apple, Orange and Blackberry – who give our little ones access to the dark side. Internet makes them grow up much faster than their parents did. It makes their adult life so much longer, and their memories of the magic of Christmas so much more short lived.

I have been a very good girl this year. So what would float MM’s boat for Christmas? Forget the technology – unless Playmobil bring out a mobile phone. Nor do I want any Febreze Fairy paraphernalia – I’m still trying to convince my family that they too can use my magic wand, aka the toilet brush. So please feel free to give the vacuum cleaners, food mixers and sundry other “time-savers” to those men who mistakenly believe that their wives will feel loved when they unwrap the latest in Cinderella technology. 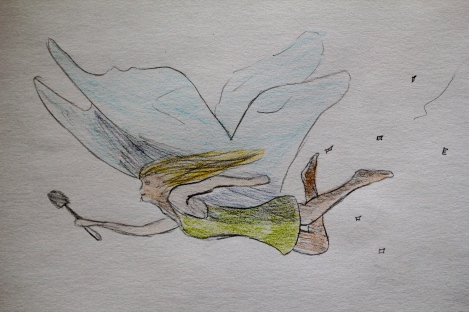 MM with her magic bog brush wand, drawn by Rugby-boy.

I remember that I asked you for a Bugatti last year, and you grinned and said that you would see what you could do. Then you quietly opened my emotional underwear drawer behind my back, and put in an old classic of lucid lingerie. A special pair of kecks I refer to as my Big Girl Knickers.

We are all very different when we strip down to our emotional underwear. My usual everyday emotional undergarment is the no-nonsense cotton Marks & Sparks tanga – ideal for a bit of banter, discussing recent events and watching the news. But this year was going to demand a much more elaborate model, and you knew it.

When the shit hits the fan and MM has to strip down to her emotional underwear, the G-string is generally her default programme. The emotional G-string category is designed for those with all the resistance of a chocolate radiator when faced with the merest whiff of stress or sadness, whose emotional undies immediately shrink and get painfully stuck in the most intimate part of their anatomy. A baby squirrel forgetting its lines at the school play is enough to set off the immediate crumpling of MM’s face, making her look like the bonnet of a 2CV after a head-on crash with an articulated truck as she desperately seeks a tissue in her pocket and ends up blowing her nose on a crumpled supermarket receipt.

I have always admired those who adopt the full-length Edwardian corset in emotional situations. They slip it on, lace it up and appear in dignified form to the world, their feelings carefully tarpaulined under a satin sheen, giving a sleekly elegant cover to the ugly fight occurring beneath. Then there are the camouflage boxer-wearers – the no-nonsense undies that say things the way they are, without excessive frills or nonsense. These are the people who remain stoic, and wipe away the occasional rogue tear behind dark sunglasses. 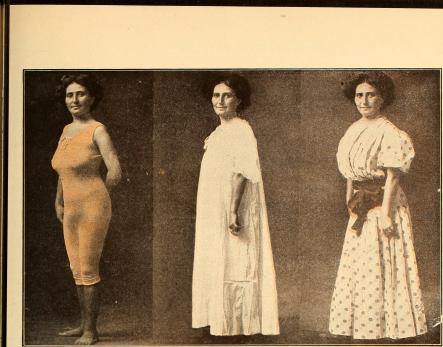 Germaine amazed her friends by the fact that she never cried in public. Little did they know that below her dress, she sported the ultimate in emotional constraint underwear technology.

And then, at the back of the emotional underwear drawer, there is the Pandora’s box that I always hated to open. I heard its occupant coughing sternly in there sometimes, and reacted by hastily burying it under a thick layer of Marks & Sparks faithfuls and closing the drawer. Meet MM’s Big Girl Knickers, to be pulled on in all GUE’s (Grown Up Emergencies). Those emergencies when crying is not an option, because I will set off a chain reaction with lots of other emotional G-stringers just like me. We are the emotional equivalent of Pringles, because once we pop, we can’t stop.

This year, my new Big Girl Knickers meant new Big Girl Attitude. Taking myself on first, to be able to take on the rest. I pulled them on and wore them to try out Dry January, then to take up running. Then I kind of got to like them, so I took to wearing them more regularly rather than hiding them away.

Wearing my Big Girl Knickers over my running tights is the closest I’ve ever got to being Wonder Woman. To those who could swear that they saw tears on MM’s face this year, the official version is that it was because of my Big Girl Knickers – I pulled those buggers up so high at times that the resulting emotional wedgies brought tears to my eyes.

But the result is there. Those Big Girl Knickers are here to stay. Along with the changes they have brought. So bring on the next pair, Father Christmas.

A very happy Christmas to you all from MM and Mrs Playmo. Thanks to you all for helping to keep us sane and smiling this year.