My heart goes out to foreign learners of my native language. English grammar stinks. So does punctuation. I am a punisher for punctuation, a grammar geek, and a stickler for spelling. Yet when I point out glaringly obvious mistakes on billboards and hoardings to my offspring, they roll their eyes at me and tell me to wake up and smell the coffee. Who cares as long as the message can be understood? The inaccurate use of quotation marks, capital letters, apostrophes, commas and exclamation marks is not deemed to be a punishable offence by Bigfoot and his generation, whatever the language concerned. His mother, on the other hand, would happily bludgeon the culprits into oblivion with a hardback copy of English Grammar in Use.

Imagine a world without correct spelling, grammar and punctuation. Admittedly, we would live in a better place where nobody would be frustrated or unfaithful, as the absence of the dashing dash would mean that extra-marital sex would disappear and only extra marital sex would remain. A win-win situation. On the other hand, be careful how you suggest that dinner is ready – without a comma, the suggestion « Why don’t we eat, John?»  becomes a matter of life or death for the person concerned.

My sad condition started out as an amused smile at the greengrocer’s apostrophe, until the latter turned into a major source of irritation for me. I took to hesitating in front of stores, unsure whether to quietly pull out a marker pen or call the Punctuation Police. Nobody else seemed to be unduly affected by this affront to the Grammar Gods. People continued walking by whilst I stood there, fighting with my punctuation principles. 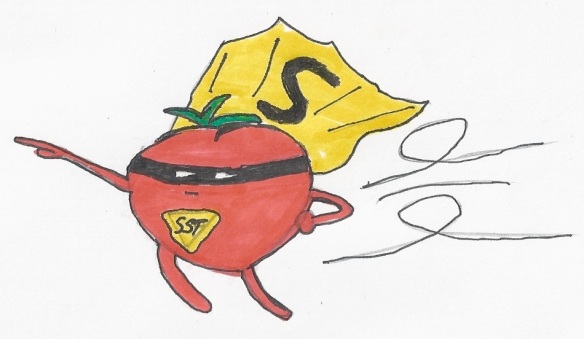 After years of teaching English as a foreign language, I finally gave in to the temptation and set up as a copy editor. I have been happily sticking my snout into scientific documents ever since, sniffing out rogue prepositions and tracking down perfunctory punctuation with more enthusiasm than a pig hunting for truffles. I see my job as the linguistic equivalent of cosmetic surgery, and I love it: give me the written equivalent of Elephant Man, and I’ll do my best to turn it into Brad Pitt.

However, I sometimes have problems switching off at the end of the day. This occasionally leads to frustration when it comes to reading in bed, my number two hobby. (Number one is writing – variety is the spice of life.) I recently snuggled up under my quilt with a promisingly well-thumbed Chick Lit novel I’d found in a charity shop. Within two chapters I was swearing blue murder at the rash of bad punctuation running riot throughout the pages. I grumbled audibly, wondering who the hell had edited the English in this book, or whether it had been edited at all. I fiddled with the corner of the page and my vivid imagination took off. I imagined the editor, drinking direct from the Chardonnay bottle as he picked out the odd spelling mistake or typographic error in the script. Then, no doubt tired of fiddling around, he must have grabbed a box of punctuation marks and magnanimously tipped it over the document like a trainee pizzaiolo attacking an unsuspecting Napoletana with an entire tin of capers. The commas scattered away into the different pages like cockroaches trying to find a quiet, damp corner to hide in, and the damage was done.

I told you I had a vivid imagination. In any case, the readability of what promised to be an excellent storyline, suddenly became somewhat, compromised; because the text was mined, with badly placed, punctuation. Ok, so I’ve exaggerated a tad, but you get, what, I mean….

The last straw was the herd of brackets rampaging across each page, giving me the uneasy feeling that the narrator was schizophrenic. The numerous asides thrown into the text made her look like her own sidekick. I threw the book on the floor, where it has remained to this day.

So spare a thought for poor old punctuation he’s having a tough time of it whether on the street or in published form. (Garnish this sentence with both punctuation and parsimony, if you please.) The day punctuation dies, we will have a heavy sentence to face.

11 thoughts on “Super Saver Tomato and the Punctuation Police.”