The Weekly Photo Challenge asked for pictures of our habits, so here’s one of mine: Playing with Playmobils. Admittedly, (and luckily for my kids) I don’t do it every day.

Little My recently informed me that she had grown out of her Playmobil house. I protested hotly; she saw through all my lame excuses and kindly told me that if I wanted, I could keep it in my bedroom. I did. Partly because she may want to continue playing with it one day, and partly because… well… I enjoy creating alternative scenarios and taking photos of them.

PF was amused to find me playing quietly there after lunch today – the ideal occupation for a Sunday afternoon inside as the wind wails around the house. Here are a few of my creations over the years, depicting true life in Playmobilia (as opposed to the politically correct stuff our kids churn out). Hope you enjoy them.

Reposted following a WordPress technical problem that suspended my blog….

The Playmobil mammas are at the ends of their tethers, and have asked me to write to you in the hope of changing things before it’s too late. I am writing to request certain modifications in your designs, in the hope of changing the depressing future currently facing the Playmobilia population. Far from being the politically correct environment described on the packet, the situation here is dire.

Our lives are limited by your somewhat narrow view of the woman’s role in society – we Playmobil girls have had enough of career possibilities that are limited to the medical care of small children and animals, cooking dinner and being princesses. What do you think we are, Miss World candidates? The playmo-mammas that recently escaped from the airport pack were most disgruntled that they were air hostesses rather than pilots. Oh, and they’d like to point out the hygiene issues of using four cups and one bottle of drink to serve an entire flight worth of passengers.

Yes, we are concerned by the limited scope you attribute to women: Why aren’t there any female bank robbers? Why can’t we be road workers sporting builders’ bums, too? Ok, we understand that for ethical reasons you cannot have pole dancers in Playmobilia. But why are we always the assistant on the box, and not the surgeon? The straight-laced, submissive female role you force on us with each new collection gets us down, and the rare times you give us something fun to do, the clothing is totally inadequate. The pirate girl down the road had to give up her sailing career when she snagged her laced top and fell flat on her face when boarding a ship. She would like to point out that you lose all credibility as a baddy when your boobs have escaped from your feminine but impractical top…. Likewise, the cowgirl ended up in hospital after attempting to  leap on her horse dressed in your choice of slip-on heeled shoes and an ankle length, wrap-around skirt.

Add to this unsatisfactory professional equation children that mysteriously stop growing at the age of ten, and we have a serious crisis. Where are the Playmobil teenagers who can babysit for the siblings so that Playmo mamma can slip into something feminine, clip on a new hairstyle and go out for a night on the tiles? Incidentally, although a choice between princess dresses, sensible housewife pinnies and Woodstock dungarees/Birkenstock sandals is all very well and good, we’d quite like to be able to slip into a mini skirt or a sheath dress slit up to the thigh for evenings out with our empty-headed husbands. Please?

The families who adopt us are another bone of contention. Our house was recently used to play out the arrival of Godzilla in Playmobilia, the well-known Michael Jackson balcony scene and an admirable, tear-jerking rendition of “Don’t cry for me, Playmobilia” by our neighbour, Mrs Jones. It can be dramatic being a Playmobil parent: the cat abducts my children from the house and shoots them across the floor with his paws until they end up under the couch, and the neighbours down the road now have to wait till Christmas to replace their toddler, who was hoovered up by the cleaning lady.

Jenny attempted to iron out her differences with her drunken husband.

Please understand that our husbands systematically drink too much due to the barrel-sized beer mugs you kindly provided in the box. THis can result in disputes such as the one pictured above. My own airhead spends his evening drunkenly laughing in front of the blank screen of the computer terminal (our host family did not buy us a TV), leaving me to deal with the children and the laundry (see below). 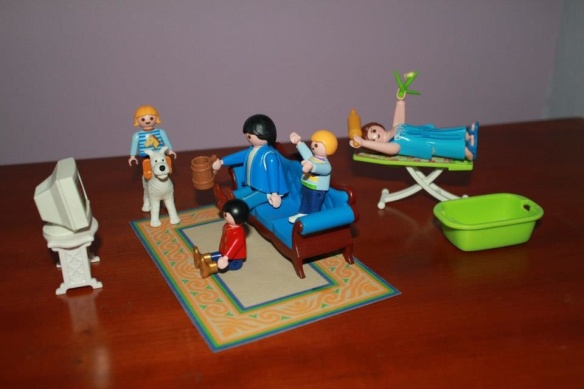 An example of maternal martyrdom in Playmobilia.

I would also like to draw your attention to your accessories, which need reviewing to respect the notion of scale. My husband had a fire at his office and couldn’t put it out, as the fire extinguisher was as big as him. Without mentioning my friend Patricia, who fell into the street when she leaned out of the window to call the cat holding one of your oversized coffee cups.

Although it is very kind of you to provide us with dining utensils, it is not much use to us as we cannot reach our mouths. You were proud to give us mobile hands, but forgot that elbows are an essential part of the equation. Likewise, the absence of knees makes it impossible for us to board a plane out of Playmobilia unaided.

One last request, Mr Conceptor: can we please have more neighbours with more varied ethnic origins? 99% of the neighbours are white middle class. My Asian neighbour is rather put out that the first Asian Playmobil was only designed in 1996, and was a karateka rather than a doctor or a dentist. There is also a samurai neighbour, and a collector American Indian family lives down the road. But they really are thin on the ground compared to the real human world that surrounds us, and they have a distinct feeling that they represent clichés rather than reality. Try going to Tesco’s wearing a full feathered headdress, and you’ll understand.

We hope that you understand our position, and that you will do your best to adjust the contents of future boxes to make Playmobilia a better place – both for us and the children we play with.