It’s the second week of the February school holidays. That moment when the sun suddenly and inexplicably disappears to the very same place we were four days ago, 800 km away, when the weather was awful but we didn’t care. The moment that the heavens open and it rains day and night, the fire splutters and dies and my offspring prowl dangerously along a well-trodden migratory line between the kitchen and the TV, leaving small, telltale piles of dirty crockery heaped around the living room like the signs of discontent left by a malevolent, incontinent cat.

Any maternal attempts to simultaneously keep them occupied during the day and keep up with the house plus my own work fail dismally – on all counts. Bigfoot, Rugby-boy and Little My complain that most of their pals are all whooshing down the ski slopes with their politically correct parents, gaining their piou-piou, bronze, silver and gold consumer badges then pigging out on tartiflette and raclette whilst my poor offspring are being fed survival rations of macaroni and ham for the umpteenth time. So I pour myself a glass of white wine at the end of the day, listen to the Rolling Stones’ “Mother’s Little Helper” full blast in the kitchen and wonder if that bra-burning lark really got us girls anywhere. Does anyone else out there in blogging land identify with this?

The next step is that the maternal brain goes into meltdown overnight, and feverishly mixes real life, fantasy and work into a fascinating cocktail. Last night it dished up a fabulous dream in which I accompanied a very good friend of mine on an outing for his infant school class. He ran along creaking, half-rotten wooden bridges spanning underground galleries, transformed into the Indiana Jones of the French teaching world. Backpack bobbing up and down on his back, he happily encouraged the crowd of four-year-olds and volunteer mothers gingerly following in his wake to be brave. He gave the kids rewards of Smarties and pieces of banana when they successfully leapt over the three-foot hole gaping over an abyss then promised to take them to visit a bison reserve for their next outing (I’ll leave you to guess what the work, fantasy and real life is in all that. As I said in my previous post, I love my job.)

Yup, holidays are an upheaval. As all parents know, the school holiday means increased numbers at home. Like the legendary Mohammed and the mountain, if your kids can’t go to school, the school must come to your kids, and the population of our humble abode increases daily as Bigfoot, Rugby-boy and Little My’s mates adopt us. I have learned to smile sweetly at the mother who says apologetically: “He loves coming here, he says it’s so lively compared to our place!” The word “lively” is an understatement: Armageddon has all the noise factor of a library in comparison with our house.

So last night, Little My invited some friends round for a sleep-over. They disappeared into the woodwork like cockroaches, only appearing to glean a tray of food to wolf down in front of the TV. I must admit I was choked up to see them lined up in bed, surrounded by brightly coloured debris of dressing-up clothes and guffawing at the film of their school trip two years ago, saying how “little” they were at the time.

A monster rainbow jelly. Ours wasn’t like this. (Photo credit: fifikins)

This morning, I was clutching my first cup of Yorkshire brew and recovering from my strange dream when three little girls appeared in their PJ’s. Little My opened the fridge, and clapped eyes on the jelly she had made the day before in her friends’ honour, only to be forgotten after stuffing themselves with home-made burgers and chips. She pulled it from the fridge and proudly exhibited it to her pals, who all cooed in awe. Little My was proud to introduce her friends to her gastronomic roots, however unusual they may appear to her Gallic chums. She drew herself up to her full height and said “Look! If you shake it, it wobbles!” A murmur of appreciation swelled in the room as she delicately made the jelly shiver. Then it happened. Three eager, synchronised pairs of hands shot out to shake the plate, and the collective force launched the beast into the air. It took off like a drunken UFO then plummeted downwards, sliding down the sheer cliff face of the tablecloth before disintegrating into a gelatinous red pile of roadkill on its impact with the kitchen floor.

The sound of hastily scrabbling claws announced the arrival of our canine cleaning service. Smelly Dog’s radar can pick up on something falling on the kitchen floor from the other side of the house, and she is there, wagging her tail hopefully, within seconds of anything leaping off the table. (Please note that nobody is ever responsible for anything falling earthward in this house: food is either driven to suicide after being cooked by MM, or it has a lemming-like attraction for the void.)

Smelly Dog careened around the door, ears flopping and expert eyes searching as she tensed her body to pounce on her prey. Screeching to a halt beside the pink molehill, she sniffed suspiciously at the jelly then lifted her head. She fixed her Nutella eyes on mine with a mixture of disgust and disappointment before returning to her basket with as much dignity as a dog can muster. Proof of the pud: A dog can happily eat cat vomit, but refuse jelly. 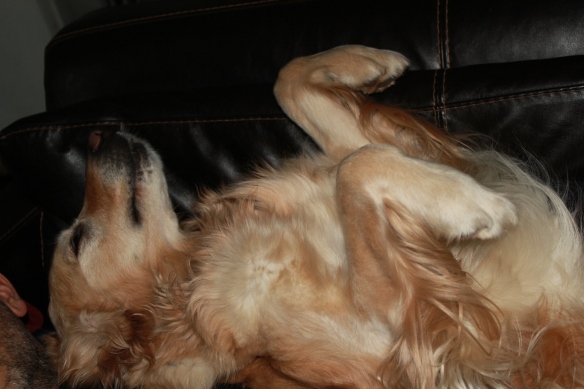 Smelly Dog pretending to be cute soft toy after eating all of PF except his head (kept for afters, see far left of picture).

Bigfoot had invited his chosen counterpart around for the afternoon, and had even tidied up his lair, proof of unconditional love. I don’t think she’ll be back for a while. PF pulled out his favourite power tool and got stuck in for the entire time she was here, apparently set on sanding a spyhole in the wall to check that they were behaving themselves. Much to Bigfoot’s embarrassment, I did however tell chosen counterpart that she can come back whenever she wants, if it means that I’ll be able to get a foot inside Bigfoot’s room to hoover once she’s gone.

I’m an optimist. That’s why I continued to work throughout the afternoon. Working from home seemed a good idea, which it is  – when the kids are at school. Only four more days, then they’re back to school and I’m back to normality. Bad mother and fully assume it, check.