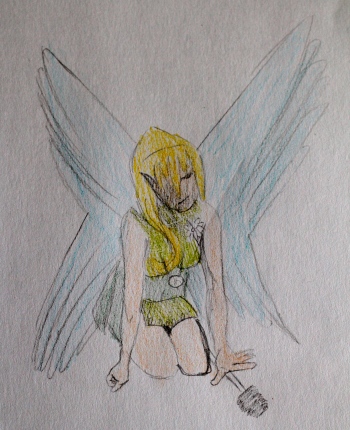 MM, the Fallen Febreze Fairy, as drawn by Rugby-boy.

PF knows that I am not the kind of woman who hits the Prozac if HMS Bogbrush doesn’t circumnavigate the toilet rim on a daily basis. He will arrive home tonight, and sigh in despair. As his forehead furrows, his eyebrows will lunge towards each other like two caterpillars that are hell-bent on copulating on the end of his nose. (OK, so caterpillars don’t copulate. But I bet they would if they could.)

He often enquires why I’m not houseproud. The only answer that comes to mind immediately is that if I was, he wouldn’t be able to draw hearts in the dust to declare his undying love for me. But there are other reasons why I don’t have “Purgo, ergo sum” tattooed on my forehead. So here is why I will never be a Febreze Fairy, in five easy points.

Don’t get me wrong; I admire her. At my age, she was Martha Stewart with Sophia Loren’s dress sense. I’m not. She attained the paradoxical summits of immaculate fingernails and a spotless home. I won’t. I accidentally knock the shower faucet and drench myself when I clean the bath. She doesn’t. In short, we’re different. So now for the visualisation exercise, PF: 1) Compare me with your mother at my age. 2) Hit your head against the nearest wall. 3) Get over it.

2) The time invested is simply not worth the fleeting result.

I have carried out a detailed feasibility study of this cleaning lark, and I have to inform you that whatever the activity undertaken, all visible evidence disappears in the space of a few hours.

Let’s illustrate this with laundry – a time-waste tragedy in six acts. I have copied this reference document for you from MM’s “Welcome to the Hamster Wheel: The Dark Side of Housework” (available from Prozac Publications): 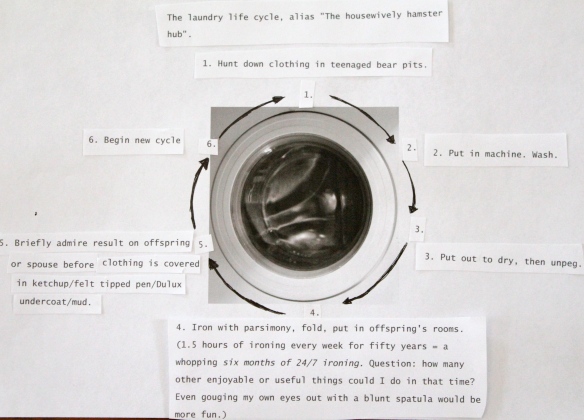 Extract from “Welcome to the Hamster Wheel: The Dark Side of Housework” (Prozac Publications).

Conclusion: Anyone who gets a thrill out of a pile of clean laundry should immediately consult a therapist and enroll for sky-diving lessons.

There are exciting hidden realms in this house just waiting to be explored. The laundry basket and the washing machine are both impatient to get to know more members of my family. They also have a distant cousin called Washing Line who lives at the bottom of the garden – her relationship with me is so insular that she is suffering from Stockholm Syndrome. She would welcome a visit from you.

I would also like to take this opportunity to remind my offspring that the dishwasher has not yet learned how to fill and empty itself. Here’s a helpful hint: the distance from the table to the sink is equal to the distance from the table to the dishwasher (this domestic equation is often referred to as “Kitchen Pythagoras”). You guys should locate the toilet brush, too, or you will literally be up shit creek without a paddle if I ever I go under the wheels of a bus.

Housework is both futile and ephemeral in this house. I can hear that clock ticking as I run around the wheel in the full knowledge that I’ll be doing the same thing again tomorrow, the day after and the week after. Hoovering a carpet for the second time in ten minutes because the dog has baptised my initial efforts with the saliva-drenched burrs she chewed out off her fur is hardly my idea of a rewarding occupation.

5) Cleaning is asking for trouble.

Maybe we could call it “maternal Murphy’s law”: Cleaning Karma bites you on the bum every time you wriggle your fingers into those Marigold gloves. If you clean the windows, the sky darkens and it immediately rains cats and dogs. Just washed the floor? The cat will throw up on it. Cleaning the bathroom before Rugby-boy returns home from the pitch is about as optimistic as getting out the Wedgwood when King Kong pops round for a cuppa.

DIY is also a common culprit in this equation: please tick the guilt-trip box if you have a) sanded down a wall just after I dusted, or b) rinsed out a paint bucket in the bath I had scrubbed in a rare surge of enthusiasm five minutes earlier.The greatest paradox of cleaning is that it’s only noticed when it’s not been done. I tried doing it regularly for a while, but nobody noticed….. until I stopped doing it.

Someone clever once said something about a great woman being behind every successful man, but I don’t think that being a sharp shooter with the toilet duck was one of the criteria he had in mind. So this Febreze Fairy Failure is off to walk the dog in the sun. If you want to cast a few spells with my magic wand while I’m out, help yourself: it’s beside the toilet on the right.

The Febreze Fairy popping out for some fresh air (artist: Rugby boy).

Happy birthday, mon chéri. I’m sorry it didn’t pan out quite as I had planned.

This is what was planned for your birthday: 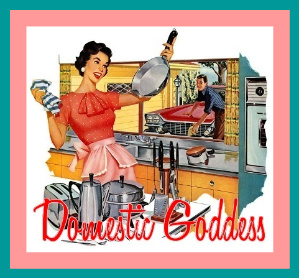 Decorate cheesecake, then Julie-Andrews my way through the house singing Mary Poppins songs as I shake the sheets out of the window and tidy up odds and ends with the help of a few Walt Disney superbirds chirping on the window ledge, flapping around my head and whistling on the end of my finger. Ask willing children to tidy their rooms and set the table, whilst I shower and slip into suitably feminine attire for your arrival from work. Give beautiful bouquet and children’s gifts. Eat fabulous meal, then pack kids off to their rooms so we can have a quiet moment curled up on the sofa reminiscing about the past and dreaming about the future.

This is what actually happened on your birthday.

Got up early and had breakfast en amoureux, kissed you goodbye on doorstep (but not Meg Ryan-style on tiptoes, ‘cos I’m almost as tall as you). Hoped the neighbours didn’t see me in my p.j’s. Heard noises reminiscent of volcanic eruptions and found Bigfoot in downstairs bathroom with digestive problems. Discovered that upstairs bathroom was out of service with blocked waste pipes. Condemned access to upstairs bathroom. Called school to tell them Bigfoot wouldn’t be there today. Uncharitably decided to quite literally cut the crap and tell the secretary that he had the runs when she enquired what the matter was. Now she knows for the next time.

Went shopping, returned home, and realised that lasagna is probably better when it has meat in it. Desperately sought the Nadine de Rothschild/Martha Stewart hybrid waiting to take over somewhere in my inner self, but couldn’t remember where I’d put her (a little like your umbrella. But that’s another story). Opened WordPress site, then resurfaced in real world what felt like five minutes of reading and writing later, except it was actually midday. Pulled on bad-girl-WordPress-addict hair shirt, ate quickly and commenced cheesecake battle. Urgent phone call from neighbour: drove neighbour to garage. Returned. Waved cheerfully to Gargamel out of a sadistic desire to make him reciprocate. He didn’t. You live and learn.

Donned 1940’s perfect housewife pinny and finished cheesecake without dropping any hair in it or dropping it on floor. Informed dog and cat that they would have to learn to open the fridge door if they hoped to eat it before you got home. Looked at clock, screamed. Abandoned huge pile of washing up in sink.

Ran upstairs, ripped off pinny, dragged on blue Super Mario-style dungarees. Spent half an hour attempting to unblock toilet with the aid of a plunger, snake and threatening behaviour. Congratulated self on wide range of bilingual swearwords and imagery around the theme of human dejections, noted this as good subject for unusual WordPress post.  Abandoned plumbing as bad idea, changed clothes, scrubbed hands with green side of sponge and huge quantities of bleach.

Went to school to pick up daughter, leaving a more chirpy Bigfoot loafing on the sofa after a day-long hibernation in bed. Drove to Aldi, bought meat for lasagna, and clapped eyes on last bunch of red roses wilting pathetically at the check-out, cringed. Pelted home. Commandeered help of all three kids to chop onions, hoover the floor, and clear up the Vesuvius of clean laundry on my bed.

Climbed ladder in lane behind house, atttempted in vain to unblock the sewage pipe, singing Gloria Gaynor’s “I will survive” under my breath whilst Bigfoot held the ladder. Explained to wide-eyed and perplexed retired neighbour why I was up a ladder behind my house with sewage dripping off my elbow.

Gave up, returned inside. Changed, scrubbed hands and arms again. Finished lasagna and put it in the oven. Turned around to discover forgotten mountain of washing-up from the Great Cheesecake Battle. Washed up, and ripped off pinny to greet you as you returned from a hard day at work, smelling delicately of bleach, bolognese sauce and blocked sewers. Bigfoot proudly presented you with your fabulous gift: vividly-coloured undies to “put some colour in your knicker drawer”.

I hope you enjoyed your evening, mon amour…… Though I say it myself, the lasagna and cheesecake eaten in front of the TV were excellent, even if they didn’t really make up for the clogged up drains.

I love you for so many reasons. We make a great team, and we still laugh ourselves stupid together on a daily basis. But today, I particularly love you for putting up with me the way I am, drowning in a teacup in situations that most other women sail through.  I will never be a Wonderwoman, but hell, at least I’m having fun trying.